I’ve been writing long enough and frequently enough to recognize my own style – but only just. In the past year, I’ve learned a lot about how I write comedy by doing the screencap comic Friendship is Dragons. It’s given me pause to think about what I find funny, and how I try to deliver that humor to others.

On reflection, there’s no escaping the fact that I owe a lot of my sense of humor to my dad. He’s the one I watched MST3K with, played games with, and shared jokes with. That’s not the only influence he’s had on me, of course – he shared his love of computers with me, as well as his taste in literature and music. We shared a home and a life together, in which I grew up to be very much like him in many respects. (Not ALL respects, naturally – I’m sure he’s glad I’m not a carbon copy of him.) I wouldn’t be the kind of writer I am today without his influence.

So this year, instead of just calling him up to say “Happy Father’s Day” like every other year, I’ve decided to make this Father’s Day special.

My dad, going by the handle GreyDuck, runs a webcomic of his own called Quacked Panes. It’s a biweekly, four-panel, sort of gag-a-day comic starring his oddball collection of… rubber ducks. Puns and silliness abound in great quantity. This comic’s been running for just over three years now, but it hasn’t been enormously popular as far as I can tell.

Ever since Friendship is Dragons became a moderate success, I’ve always felt a little bad for being the son that blows his father out of the water. It’s no big deal, really, but deep down I’ve always wanted to pay a little bit back. Today, that’s exactly what I’m doing.

When I called out for logo artists Tuesday, one of the people who responded was frostedWarlock, who illustrates an MLP character Tumblr called Rainbow Dash Replies. I recognized his distinctive style, and while it wasn’t what I wanted for my comic’s logo, I thought it’d be perfect for making a Father’s Day card based on my dad’s comic. This is the final result: 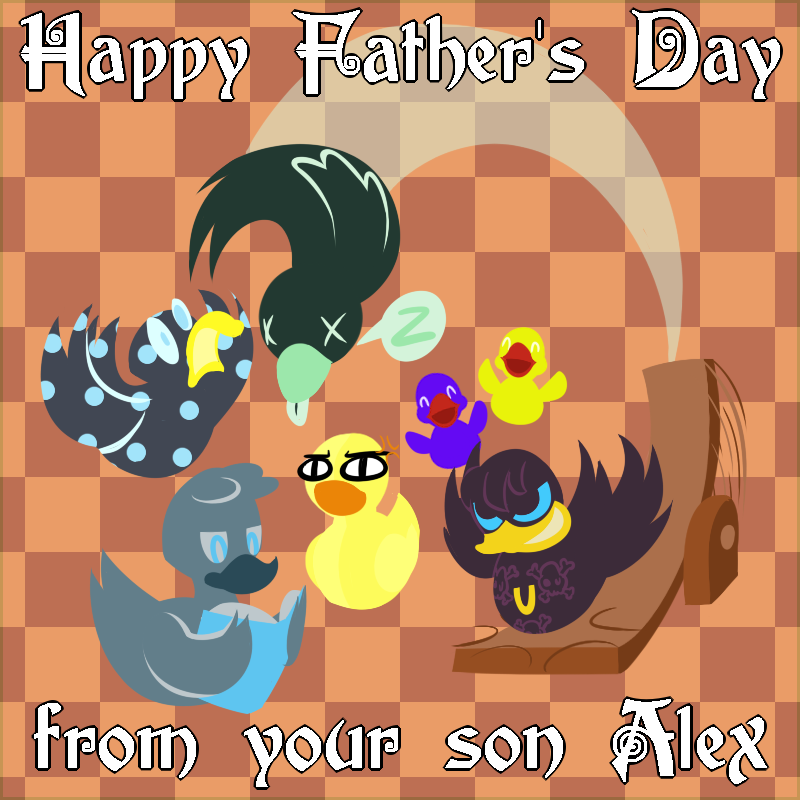 Additionally, I’ve made a sort of tribute comic that’s being posted on Friendship is Dragons today (even though I don’t update on Sundays), which you can find here. And I’m urging as many of my readers as I can to visit Quacked Panes and give it a look.

So my Father’s Day 2012 plan is fourfold: appreciation, art, tribute, and (hopefully) traffic. All in the name of ducks and ponies.

Happy Father’s Day, dad. Hope this makes up for years of not getting much on this holiday.

This site uses Akismet to reduce spam. Learn how your comment data is processed.

Home of an aspiring game designer.